* *
"If war happens out there, we will fight the violators earnestly."

Private documents on the islands in the Eastern Sea

( Your Excellency)
My name is Hà Liễu, supervising official of Cù Lao Ré, An Vĩnh village, belonging to the Inner Treasury, Hà Bạc, Bình Sơn precinct, Quảng Ngãi province (2), having the courage to beg the following in your gracefulness and bestowal :

Originally our village had two groups : Hoàng Sa and Quế Hương; in the year of the Goat (3), Đốc chiến ( Chief soldier) (4) Võ Hệ submitted a request to found two more groups : the Đại Mạo Hải Ba and the Quế Hương Hàm, consisting of 30 men. Their annual tax were 10 thạch ( roughly 50 bushels , or 480 galllons) of tortoises or trionychid turtles, 5 lạng (roughly 150 grams) fragrant cinnamon. By the year of the Cat (5), there was order that villagers in Hà Bạc who possessed red certificate or red application, had to pay tax in a different way, and had to bring in their accounts to show. From then on, we had to increase our population and started villager-soldier programs. By that time the number of soldiers in our village was 23 men; we had to augment the number and paid some more for the toll fees to be able to carry out the orders satisfactorily to date (6). Now we are requesting to establish two groups Hoàng Sa and Quế Hương as previously done in which there will be some outsiders. We will inform you and note in books to submit. We will travel by boats to the islands to collect things, namely items in copper, tin, sea cucumbers, trionychid turtles; all will be submitted to you. If war happens out there, we will fight the violators earnestly. After fightings are over, we will seek order to return to the sea to continue our work and bring items back to submit. You have our words that we will faithfully and dutifully perform our duties without any complaints. Please accept our request and thankfulness. (7)

Notes:
(1) Cảnh Hưng is the period name of King Lê Hiển Tông (1740-1786)
(2) Cù Lao Ré area is the common name; its official name is An Vĩnh area
(3) From 1775 backward, we can count a few years of Tân Mùi ( the Goat) such as 1751 and 1691. Right after that the author mentions the year of Quý Mão (the Cat); the nearest Quý Mão from 1775 is 1723; therefore the Tân Mùi mentioned here can only be either 1691 or 1631. The word “nguyên” (originally) in the first sentence denotes a period before 1691 or 1631; that means the Hoàng Sa group had to be formed before 1691, or even before 1631.
(4) “Đốc chiến” ( roughly Chief soldier) could very well mean a military rank.
(5) Year 1723. See note (3)
(6) The message in this part is not very clear. Summarily it can be understood as : An Vĩnh village originally had two soldier groups : Hoàng Sa and Quế Hương. From 1691 they were added by two more groups: Đại Mạo Hải Ba and Quế Hương Hàm; officially the total the number should be 30 men, but by that year (1723) the existing number was 23 men only; therefore the village had to recruit and augment it to 30 men and paid extra fees to be able to operate satisfactorily up to year 1775.
(7) The activity of the Hoàng Sa group written in this request basically resembles what was recorded in Lê Quí Đôn’s account in Phủ Biên Tạp Lục (Records of Administering The Frontiers ) written in 1776, a year later.
(8) Thân : Decision of the upper level. In this case it was “Approved”. 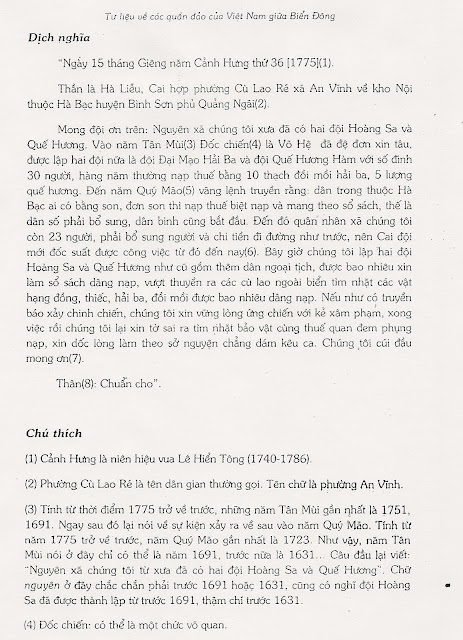 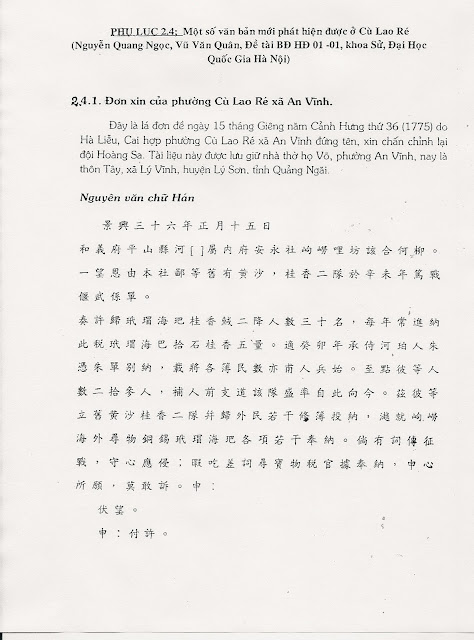 Posted by SunyataGL at 3:59 PM