Approaching end of Lunar year, older Viets are used to relate past events

When I was around 25-28 I read Henry Miller’s writings with fascination.
What a grand author— crazy, rebellious and extravaganza-induced, too.
He’s like a rumbling thunder cascading onto the artistic “world”, the values, the beliefs, the tastes of the American soil and its cultural traces— high and low with hammer strikes.
I like his “natural” craziness a lot. I mean, a lot. Somehow in his craziness and out-of-proportion hollering and critique I saw some brightness, grandeur-like authorship and the attractiveness of an aura.
He was the pre-pre-hippie originator of words and anti-establishment sentiment, especially Protestant idea of cleanliness,  order. [ He was much on the other side, revolting, opposing Protestant sexual propriety and behavior]
I was delighted. Yes, there must be someone, a couple of writers or thinkers, or whatever, who are “big” enough to shadow a part of Manhattan skyscrapers, to shove in, to fight, to criticize, or “adjust” American complacency, self-centeredness and consumerism.
I usually like cultural critic who is rational enough, and does it in a tasteful, not dry way And in some ways Miller’s criticism may register some blaring, hard-to-hear, but reasonable notes. But the artistic freedom in him , frequently morphs into a wild beast, too sybaritic, or hedonistic for me.
And I was misguided about 15% ( 😃 ) by his opinion on American foods in those early years in the . In my perceiving, he equated it with hot dog, hamburger, and fries.
He "assassinated" American taste in foods in a pretty damaging way. He could have been a French agent (who embraced Walt Whitman)  in this  :-)  . While praising French cuisine, he gave detrimental blow to American foods. I think, his rather obsessive view against American lifestyle, or cultural gaucheness distorted this view on taste
A quarter of a century later, when I gradually paid a little attention to the food taste issue and tasted more American foods, I found there are good, excellent tasting American dishes— not too many, but enough to “satisfy” me.
1.   First of all, American meatloaf. I first had it when I was with my sponsor in 1975. The tender loaf combining ground beef, bread crumb, crackers, garlic, onion, black pepper, tomato sauce , Worcester sauce and ketchup was rich in texture, very delicious. Boston Market restaurants have similar taste.
2.   American GI ration C hot dog in , belonged to the first-rank wiener. I had it during the 70's, and still remember the taste. Hebrew National Beef Franks has similar taste.
3.   Roast Beef : With wine, beer, rosemary, thyme and other ingredients added, it’s one of American best
4.   Top sirloin and rib-eyed steak, filet mignon etc. steaks : They’re pretty “universal” for Americas and Europe, but Black Angus, Hitching Post II, Arroyo Chop House, Craftsteak ( Las Vegas) to name a few, make excellent steaks to fit American taste
5.   Roast Pork, or slow simmered roast pork. Excellent American taste with a variety of ingredients with apple (or not), rosemary, thyme, sage, black pepper , beer (or not), tiny potatoes, carrots, pork. From the East to West coast, in the hands of the American mothers, aunts, cooks, in home-made or restaurant cuisine this dish has savored the taste to a super grade.
6.   Baby rib racks : tender, juicy with 3, 4 flavors of marinade of your choice
7.   Peanuts: For a brand name, like Planters , its peanuts can hardly find an equal standing in grade all over the world, I believe
8.   Or Almond Roca, chocolate covered butter-crunch toffee from : Nobody can beat that. Its crispy, brittle, fresh, easy-to- crumble-in-mouth quality excels way beyond. One bite; you’re in heaven :-)
9.   Wisconsin Summer sausage : Expertly prepared and cured. My daughters love it :-)
10.   Corned beef : With simple cooking procedure, this dish provides a simple , but tasty beef stock, and beef.

11. Popeyes & KFC : Their crispy, tender, juicy chickens are hard to find contender
12.     Hershey, M&M, Riesen, Nestle chocolates : I prefer Hershey, M&M chocolates more than Godiva’s
Those twelve are the ones I like best, not to mention a very popular, regular, cheap, fast food item, French fries. Of course, there some more. At McDonald’s or In-N-Out Burger any time, one can taste this hot, crispy, pleasing cheap item for a fast lunch , or little dinner with a double cheese burger, and a Coke.
Sorry, Henry, I always felt you overdid it, and can not agree with you on American foods. :-)
P.S:

1. I have just tried my hand on a slow simmered roast pork, with rosemary, sage, black pepper, tiny potatoes and carrots, with 1.5 lbs of shoulder cushion boneless pork today for the first time to surprise my kids. It turned out very tasty. :-) 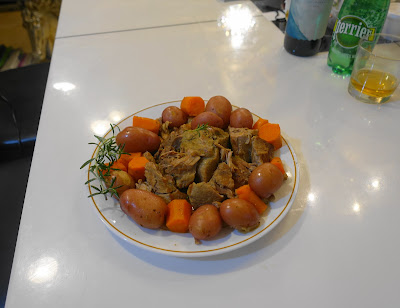