In an extremely stupid proposal, from the Department of Education and Training of Vietnam, to change how Vietnamese should be written, a familiar Latin-Roman alphabetization ( and some pronunciation) with the way Chinese alphabetize their words, in Guangdong for example,  was observed . A quick review can show the stupidities, to name a very few :
1. The pronunciation of some consonants go against --not only Vietnamese , but usual international phonetic systems. For example :
a) Thủ tướng ( Prime minister) , in new 'system' : Wủ tướq. The "th" in normal Vietnamese is pronounced a little "lighter than the English "th" in 'theme', "thunder'. 'throng' , 'thud 'etc.. The position of the tongue is to produce voiceless dental sound in the IPA (international Phonetic Alphabet). What is the symbol "w" doing here ?
b) the nasal "ng" at the end of "tướng" is completely destroyed and replaced by "q" . What the hell is this q doing here ? Again , that "q" cannot represent the nasal sound of "ng" , which sounds something like the "ng" in IPA as : bang, étang ( French), or wanting, thinking, kicking, stopping ( English)
2. With the way the Portuguese, French missionaries, especially Alexandre de Rhodes, who created the present system of phonic transcription in Roman alphabets, a number of linguists believe they had done a  good job at the time. Replacing them , now, with a new, strange, ' funny and ridiculous', hard to accept way to write and pronounce Vietnamese words will be greeted with very strong rejection.
3. Language is a live entity, it goes with life. Many old and new terms, phrases, idioms when expressed in the new way of characterization and "alphabetization" not only give confusion, but nonsensical meaning as well as usage, at the least.
This is a rather clear signal that the Chinese communists are trying to assimilate the Vietnamese language with Chinese in a dangerous move to erase Vietnamese cultural heritage to annex/incorporate the country; change and fabricate its language, history to try to prove, in the future, Viet Nam has been a part of China, just as they have destroyed pagodas, cultural heritage of Tibet. Vietnamese are protesting this change.
The communist bosses, headed by the obscure-minded Nguyen Phu Trong, just kowtow to their Chinese bosses to facilitate this change. They ordered this despicable moron, the so-called language professor, Buoi Hien to make up schemes to prove that there are familiar sounds in the Viet language to Chinese, so that's how Vietnamese language should be alphabetized. The Chinese communists have planted this traitor seed, Buoi Hien, to harm the Viet's language for some years by now. This is Chinese aggression at the level of cultural activities and implosion.
Song Ngọc parishioners in Nghe An province protest this linguistic change and environment destruction by Formosa on Sunday 9/2/2018 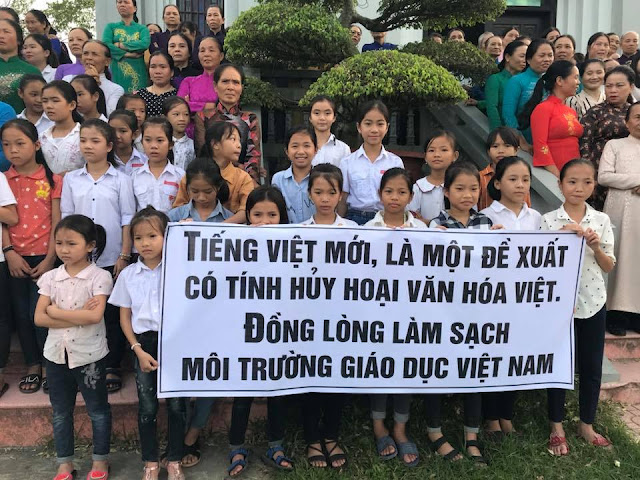 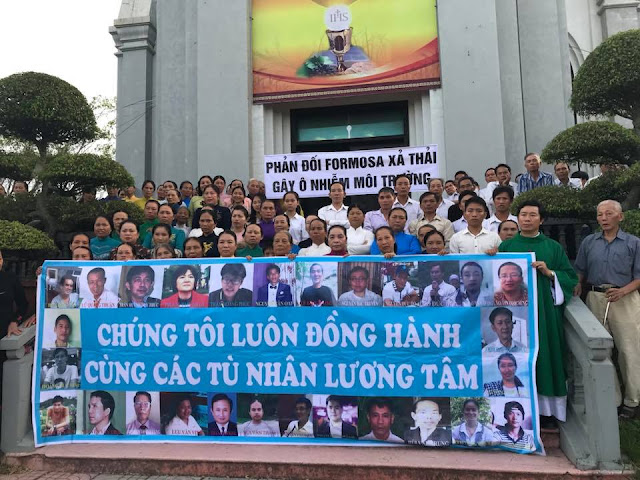